How to set up and run a crowdfunding platform legally ?

How big is the global crowdfunding market? The dramatic proliferation of CFP (Crowd Funding Platform) is due not just to technological developments but also, in part, to the aftermath of the recession. Banks, VCs and other institutions are still loath to lend to pre-revenue businesses. Angel investors are inundated and reject 99% of the applications they receive and demand a big slice of equity from the 1% in which they are interested. “Friends and Family” are wary and have little if any spare cash. The continued financial depression and lack of growth plans on both sides of the Atlantic are making the difficulties of funding more acute. However, life is also tough for high-street investors as banks continue to offer unattractive rates of interest to savers. At the same time, the development of the internet and social networks has reduced degrees of separation from six to fewer than two, and considerably increased potential marketing reach for new businesses. Crowdfunding may offer a potential escape from both of these key issues.

There is much ignorance in the marketplace regarding both CFP and entrepreneurs setting up CFPs, and those intending to enter the market should seek guidance from professionals who deal with these issues on a daily basis. To date there are three fundamental models which prevail, namely Reward, Equity and Loan. The terms “Alternative finance”, “Peer to Peer Lending” and “crowd investing” are often used to refer to the Equity and Loan models, indicating that the investor expects or, at least, hopes to receive a financial return on its money.

Issues those are really threatening for above crowd funding models Since crowdfunding is still a relatively new phenomenon, there is not always consistency in how different terms are used and defined within the research. However, crowdfunding can generally be divided into four main categories: Where last year’s worldwide crowdfunding statistics showed a market in rapid growth in all regions of the world, a recently published report displays a more varied situation. The three countries dominating the world’s crowdfunding market are still China, the United States, and the United Kingdom, but where the US and the UK still show impressive growth rates of 42.4% and 30.7%, respectively, the Chinese funding volume has dropped by -39.9%. However, China is still the market leader worldwide with a market share of 70.7%, followed by the US with 20.0%, and the UK with 3.4%. Next on the list, we find countries like the Netherlands, Indonesia, Germany, Australia, Japan, France, and Canada – all with significantly smaller market share. 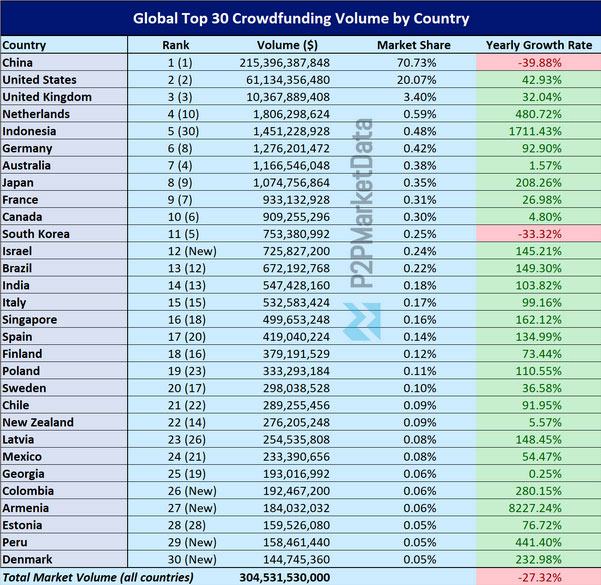 connect with our associate

Complete the form below and we will contact you to discuss your project. Your information will be kept confidential.